Preserving the Wealth and the Variety of Balinese Ancient Society Denpasar, DREAMSEA – In 2019, our mission to preserve manuscripts in Southeast Asia started in Denpasar, Bali, Indonesia. The mission took place from 10-15 January 2019 and aimed to preserve the palm-leaf manuscript collection of I Made Kajeng Waras Himawan Suweca by conserving and digitising them.

The mission was executed by DREAMSEA in cooperation with the Indonesian Association of Nusantara Manuscripts (Manassa), the National Library of the Republic of Indonesia and the Aliance for the Care of the Balinese Language (APBB). The team was chaired by Aditia Gunawan, a Manassa activist who works at the National Library, together with I Gede Gita Purnama (Udayana University, Denpasar, Bali), Carma Citrawati (Dwijendra University, Denpasar, Bali), Ilham Nurwansyah (Indonesian Educational University, Bandung, West Java) and Surya Selfika (Andalas University, Padang, Sumatra).

“During the week we made efforts to preserve the manuscripts owned by I Made Kajeng Waras Himawan Suweca which he keeps in the Gedong Bale Daja. The mission’s target was to make more than 2000 images from 50 palm-leaf manuscripts”, Aditia explained.

Before we started this activity, the manuscripts’ owner first performed a ritual in which he prayed to the gods so that the execution of our activities would go unhindered without meeting any constraints. The entire team was sprinkled with holy water in the hope that the activity would be blessed by Sang Hyang Widhi. After this, he opened a wooden chest and showed us his 50 palm-leaf manuscripts and we could also smell their distinct odeur. 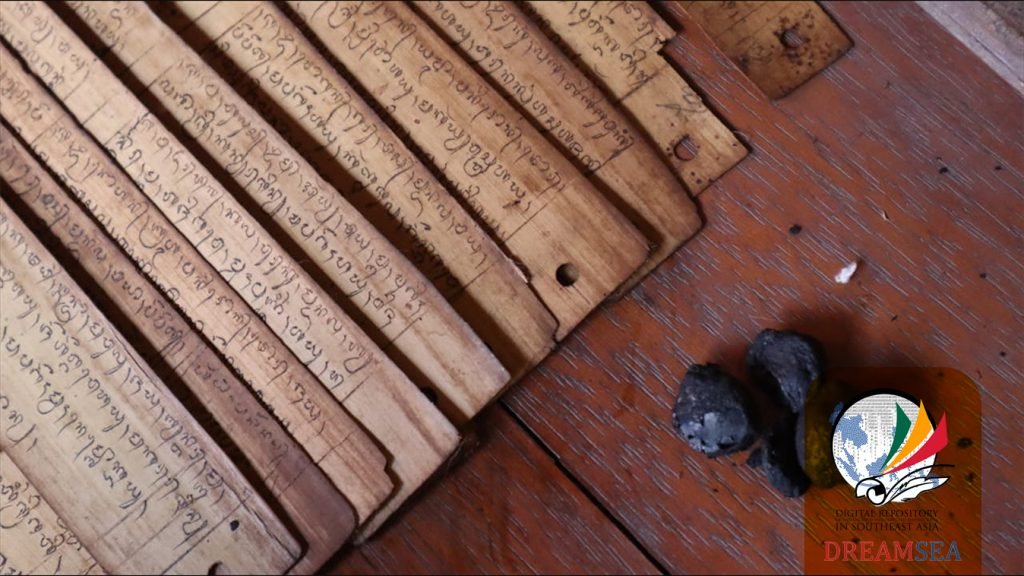 In this case, the digitising process was somewhat different from the one we used in our digitising missions of paper manuscripts. The team first had to prepare each individual leaf before they could be photographed. Assisted by the acvitists for the care of the Balinese Language, the team members first cleaned all the palm leaves with citrus oil and blackened them with sooted candlenuts so that the script became much more easy to read and would come out well in the digitised images.

While blackening the leaves, Ida Bagus Ari Wijaya from the Alliance told us that he was very enthusiastic to be able to read each individual manuscripts leaf and he was elated to find that one of the manuscripts was written as early as 1778. It was one of I Made Kajeng’s manuscripts that contained the Old Javanese poem Kakawin Arjunawiwaha.

Also I Made Kajeng was very happy because for years he had been keeping his ancestors legacy that was written in Balinese, Old Javanese and Sanskrit and already for a long time he was convinced that his manuscripts contained his ancesters’ knowledge and expertise.

“For me, the most important thing of this activity is that the contents of the manuscripts and the knowledge they contain can be opened up in a more detailed-way”, I Made Kajeng hoped.

I Made Kajeng’s manuscript collection contains interesting and important things. For instance, when his collection was evaluated, the team discovered that it contained pipil tanah(Land certificates) thought to be owned by the Pemecutan Kingdom in Bali. The Panegara Badoeng(thought to be the origins of present-day Denpasar)owned by the Kingdom of Badung was discovered as well. Other manuscripts contain a variety of texts such as kakawin, tutur, tattwa, mantra, wariga, usada,andgeguritan.

Because of DREAMSEA, the diverse information from these manuscripts will be accessible to the public through its repository that will contain hundreds of thousands of images from manuscripts from Southeast Asia. The program will continue until 2022 and is a cooperation between PPIM UIN Jakarta and CSMC Hamburg supported by Arcadia inLondon.[AG]