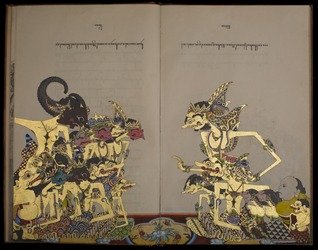 ig. 3. Meeting scene in the Kingdom of Ngastina. Bima (the figure on the left with the large black face) and his party make an appearance at the court of King Duryadana (top figure on the right), who is attended by his retainers. Note the single line of text above the illustration. Pages 14-15, according to the pagination given in the manuscript.

In 1927, J.C.F. von Mühlen, the private secretary of Prince Hendrik, the husband of Queen Wilhelmina, donated a beautiful manuscript of the Dewa Ruci to their daughter, Princess Juliana of the Netherlands, now preserved in the Royal Collections, The Hague. The manuscript was written in Yogyakarta, one of the four principalities in colonial central Java, in the Javanese year 1834, corresponding to AD 1904. According to the information given at the beginning of the manuscript, it was not made for Princess Juliana but rather for Crown-Prince Kangjeng Gusti Pangeran Adipati Anom Mengkunegara Sudibya (1879-1913), son of Hamengkubuwana VII, the Sultan of Yogyakarta. The prince unfortunately died in 1913 and thus never ascended to the throne. We do not know how this particular manuscript of the Dewa Ruci, which was and remains a popular story in Java, ended in Mr. von Mühlen’s hands, nor why he opted to give it to Princess Juliana rather than Queen Wilhelmina. Read More