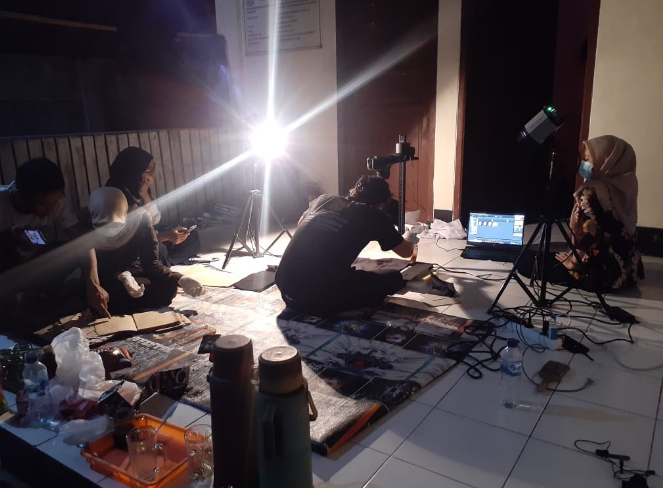 Karawang. DREAMSEA. The Digital Repository of Endangered and Affected Manuscripts in Southeast Asia (DREAMSEA) has returned to safe manuscripts in private collections in Indonesia. From 23 to 26 April 2021, 900 pages of numinous manuscripts from a number of regions in Karawang Regency in West Java have been digitized.

The manuscripts come from five locations of which three form legacies now preserved by the gate keepers at the holy graves of Syekh Abidin Ciranggon, Mbah Ribiah Cikampek Pusaka and Kampung Gempol Bojong. The two other collections are kept in the Sukaluyu and Wadas regions and are privately owned.

The manuscripts kept at the holy graves are treated in a special way by the gate keepers and at special times rituals are held. For instance, at the holy grave of Mbah Abidin Ciranggon these manuscripts may not be touched by anyone except after permission of the gate keeper has obtained. In the month of Mulud (Rabiul Awal), the heirlooms are cleaned with water that contains seven flowers. Prohibitions are also still in place up to the present such as the prohibition to keep goats around Ciranggon as this was forbidden by the ancestors.

A similar situation exists at the grave of Mbah Rubiah in Cikampek Pusaka. At night on the first of the month Suro (Muharram) a cleansing ritual is enacted with water with flowers for the heirlooms after which a nuruban procession is held during which all the heirlooms are covered with which cloth. These heirlooms consist of Javanese daggers (keris), copper perforated coins and various manuscripts. Unfortunately, only two of these manuscripts are still in a rather good condition. The manuscripts contain texts on theology, daily prayers and jurisprudence (fiqh) from which we may conclude that Mbah Rubiah was engaged in spreading Islam in Karawang, a fact that the gate keeper acknowledges. In Kampung Gempol Bojong the situation is similar and manuscripts are preserved by Eyang Endun, the gate keeper at the grave of Embah Sariban. Each 13th and 14th of the month Mulud (Rabiul Awal), a cleansing ritual is enacted.

Faiq Anshori, who was the team leader of the digitization mission in Karawang told us that in various places eight manuscripts were kept including one lontar (palm leaf manuscript), one manuscript made of tree bark (daluwang), and others written on bamboo, wood, and European paper. They contain various texts including mystical poems, charms and texts that contain Islamic teachings. They use various scripts including Arabic, Pegon (Arabic script adapted to the needs of Javanese and Sundanese), and Javanese whereas they are written in Arabic, Sundanese and Javanese.

One of the manuscript owners, Ade Hasan, has great expectations because DREAMSEA has offered to digitize his manuscripts. “Now I feel like I am connected with the past of my ancestors”, he said.

Neni Martini, the Head of the Section of the Preservation of Cultural Values at the Tourism and Cultural Board of the Karawang Regency appreciates DREAMSEA’s digitizing mission. She expects that through this preservation effort, society will get to know more of the history of the various places where they live. “I strongly hope that the manuscripts in Karawang will be studied and their contents become known by society at large”, she said.

The speed of manuscript deterioration

The challenge of the mission was the condition of the manuscripts because they already started to become damaged and the leaves stick together because of a minimum of proper preservation treatment. The DREAMSEA expert, Nurwansah, said that the deterioration process of the manuscripts in Karawang is rapid so that swift preservation efforts are in order.

“The damage is obvious and occurs rapidly. When the manuscripts were surveyed in 2019, their condition was still OK although some had some holes in them. At the time, we were unable to preserve them immediately because of the 2020 pandemic. We were only able to resume our preservation efforts two years after the survey and it appeared that only half of the number of manuscripts remained and that they had become moldy, paper stuck together and they had been eaten by insects. It was very sad”, he said. Condition when surveyed in 2019. DREAMSEA not only digitizes manuscripts. To prevent continued deterioration, it also teaches the people about basic manuscript treatment. “Apart from preserving their contents, we also hope that the people will be able to properly take care of their manuscripts themselves”, said Ilham.

Oman Fathurahman, one of the two DREAMSEA principal investigators stresses that the Karawang mission is part of the program to preserve manuscript in Southeast Asia executed by DREAMSEA which is a cooperation between the Center for the Study of Islam and Society (PPIM) of the State Islamic University Syarif Hidayatullah in Jakarta and the Center for the Study of Manuscript Cultures (CSMC) of the University of Hamburg.

“We are greatly helped by the support of the DREAMSEA program that is funded by the Arcadia Foundation set up by Lisbet Rausing and Peter Baldwin in England. Its main mission is the preservation of cultural heritage, environmental preservation and the promotion of open access in the entire world”, stated Oman who is also the pillar of the program Ngaji Manuscrip Kuno Nusantara (Ngariksa, Nusantara Ancient Manuscript Studies) on social media. (Gate keeper (in the center of the photograph) at the grave of Embah Sariban, Gempol Bojong).